The SLS is an advanced, heavy-lift launch vehicle that will send astronauts into deep space and open up the possibility for missions to neighboring planets. The program is enabling humans to travel further into space than ever before and paving the way for new scientific discoveries and knowledge that was once out of reach.

Technetics has worked closely with program design teams for critical applications for the Core Stage and Upper Stage on the SLS. Specifically, a number of precision sealing solutions and fluid management components were needed for Aerojet Rocketdyne’s RS-25 and RL10 engines to ensure the integrity of the overall system. By working closely with engineers at Boeing and Aerojet Rocketdyne, the Technetics team designed, tested, and implemented custom solutions to solve the critical sealing needs within the engines. Within the Core Stage on the RS-25 engines as well as the Upper Stage on the RL10 engines, solutions included custom metal seals, NAFLEX and K-Port seals, carbon face seals, BELFAB® edge-welded metal bellows, and accumulators.

Because of the ongoing commitment Technetics has to Boeing and Aerojet Rocketdyne, both organizations have recognized Technetics for their excellent supplier contribution to the SLS program.

Boeing representatives held a supplier recognition presentation for the Technetics team members, citing outstanding performance in providing hydraulic accumulators and reservoirs for the Thrust Vector Control hydraulic system located within the Core Stage of the rocket. Technetics was one of the first suppliers on the program to have provided all Flight 1 requirements and subsystem test units.

The SLS program is ongoing, and Technetics continues to work closely alongside the teams at NASA, Boeing, and Aerojet Rocketdyne to develop custom-engineered sealing and component solutions that provide safety, performance, and reliability while subjected to the harsh environments of deep space. Technetics is honored to be a part of the history-making SLS program and is eagerly awaiting upcoming launches. 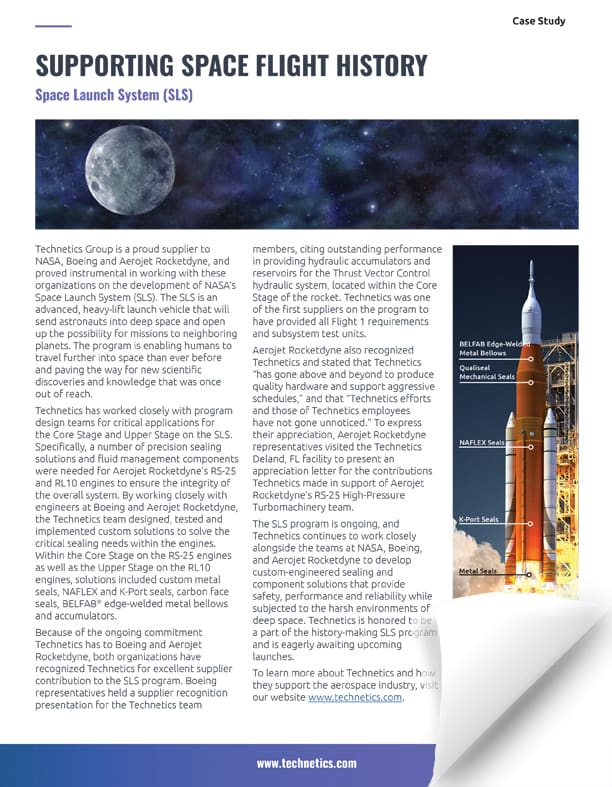